Continuing on the recent project round-up, we have some frocks to discuss. Two are awesome. One is not. Let’s start on a high, shall we?

Ages ago I made a notch-necked sheath from loud corduroy. It became my favourite of all dresses. I love it the best. I wanted to make it again so when I hit the Fabric Store‘s 40% sale, I went in looking for sheathables. Not usually a lover of lace (chantilly, no matter how expensive, looks like nasty trash to me. I also think diamonds are shabby. Perhaps my X chromosomes are defective) I found a geometric lace that didn’t give me the shudders. Off we go then!

I interlined it in a turquoise blue stretch cotton woven and went to town. I even got the neck notches right this time. 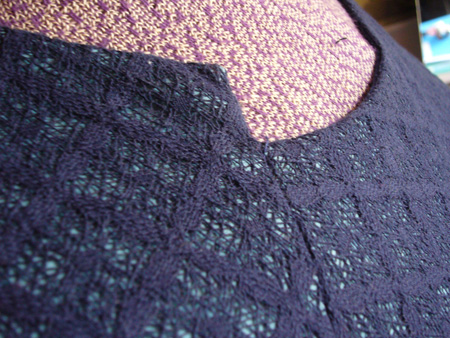 Look at those buenos notches.

And because Headless Esme’s rack is higher and smaller than mine, here ’tis on real flesh in a crappy phone photo:

I made this twice but I’ll spare you a look a the second one because it was a costume made in nasty stretch silver for a space-themed gathering. This one is much classier… so classy that the first time I wore it, I didn’t feel like myself. It was too tasteful. 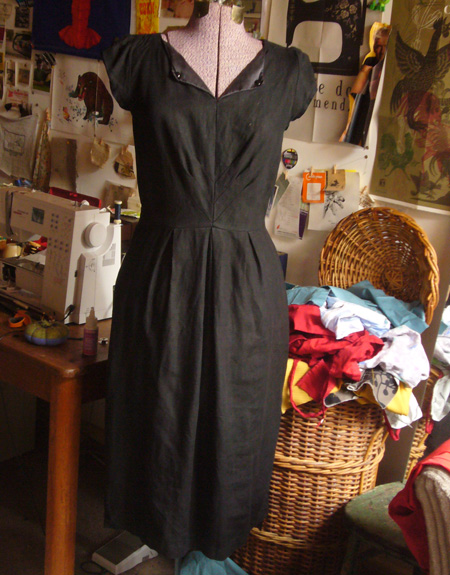 The little turned over collar and buttons are pretty dandy.

The linen was an op shop score yeeeeears ago. It reeked of cheap dye and stained my yellow cardie on its first wear. Four or five washes later it doesn’t smell but I will be sniffing every bit of fabric from now on. If it has the stink, it’s not welcome in the stash.

Last weekend I dragged Moggy (kicking and screaming, as you can imagine) to the Rathdowne Remnants yard sale. (We got $1/m cream merino jersey. We win.) She was wearing a becomming frock so I borrowed the pattern when I dropped her off and went home to make it, thinking it would be ideal for my impending USA trip. I’ve had this green wool jersey in the stash for years (I think it was a v. cheap Darn Cheap score because it had a fault or two in it) so schnip schnip, I cut it out.

It looks like a dressing gown on me. The solid colour is blah. The fit is for the slender of hip not the ample of pelvis. It’s just naff. It remains unfinished. What’s the point? Maybe jersey dresses are never going to be my thing. I’ve tried a few and they’ve never lasted long.

Green jersey dress fail. Headless Esme doesn't fill it out right but it doesn't look much better on me. Bummer.

My 50s sheath made up in 70s lurid sulphur-yellow rose-printed corduroy that I warned you about in the previous post is finished and I’m delighted with it!

Who knew that mashing up two such disparate decades would work?! Love it. So soft and cosy. And the fit is great – the only thing I’d change for next time (and I suspect there WILL be a next time) is to bring it in a bit at the top of the back seam where it’s a bit roomy because I have no shoulders.

I would like to make special mention of lsaspacey for two reason. One, is her series on designers on the Colette Patterns blog is awesome. Secondly, she requested that I make the sassy neck detail (done) and talk about the instructions for this given my proclivity to charge ahead without reading them properly. Let’s have a close look at the neckline, eh?

Right. Now the eagle-eyed among you will notice that the wee pointy bit does not line up with the raglan sleeve seam. It’s set back about, oh 1.5cm. How could this be? This is not in the pattern illustration! They lied, again!

Nah. I just didn’t read the instructions again. I sewed the facing on in one fell swoop whereas I should have stopped and started and pivoted and so on to work around this seam. Never mind – it worked out ok, but next time I’ll do it right, if for no reason other than penance, and I feel I owe it to lsaspacey…

So we rabid fans for old stuff love to shakes our heads nostalgically and talk about how modern sewing patterns are made for the masses and fitting is a dead art, woe, lament, etc. Old patterns were just so beautifully drafted, we say.

Not always so. I’m going to show you a zinger of an error in a pattern I’m working on. It’s a small thing… but surely, because it’s a small thing, the fact that it’s wrong is more puzzling and infuriating. 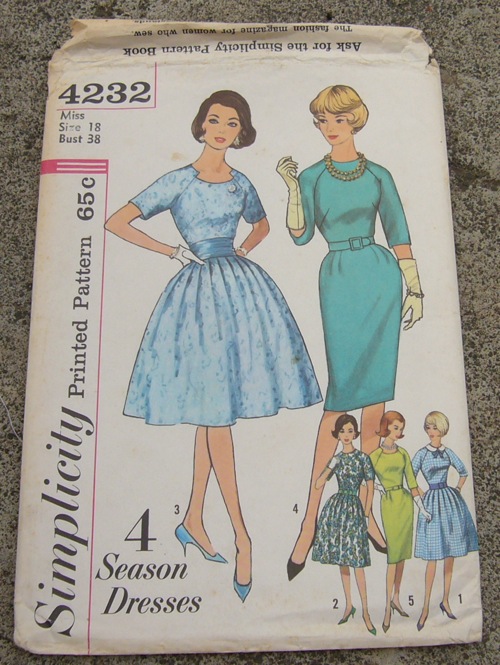 Here’s the pattern piece for the bodice. That’s quite a deep dart, non? That’s to be expected because it’s doing the work of both a bust dart and waist dart. Ambitious little thing. Sure to go far in this world.

Let’s see how it lies when the dart is sewn and pressed flat. Traditionally you press bust darts down so let’s examine that first…

Oh my, that’ll never do. See how the dart isn’t caught in the side seam the whole way down? What’s that little triangle going to do flapping away in there, unrestrained? It’ll fray and make a weird bump on the outside, that’s what it’ll do. No no no. So maybe it’s meant to be pressed up? I advocate pressing up anyway because if you’re going to have extra bulk hanging about, wouldn’t you rather have it enhancing your bustular region rather than upgirthing your midriffery? I’m not the only one who feels this way – pattern~scissors~cloth is a bit more scientific about it, though…)

Oh my word, that’s even worse! Outrageous! You can imagine my indignation as I made up my muslin. Well, let’s see how Simplicity explains this disaster! Get me a time machine so I can zip back to whenever this pattern was made so I can shake my fist at the Simplicity patternmakers!

LOOK AT THAT! They don’t even DRAW DIAGRAMS accurately! Those bust darts are huge, how on earth are they little skinny slips of things now?

My tip to you…. read every word of the instructions. Don’t just look at the pictures. Because old patterns were so beautifully drafted and they thought of everything.

By the way, if you’re easy offended by anachronism and the colour pallette of the 1970s, look away now.

I’m making this dress (with trimmed, open darts) out of some printed corduroy that my sister in law gave me when her mum cleaned out her fabric stash. I love to think the her mum had plans for a suit, or maybe overalls for this. And believe me, that gold colour is even more radioactive in real life. So awful it’s good. I”ll be like a walking velvet painting and eyeballs will be insulted everywhere.